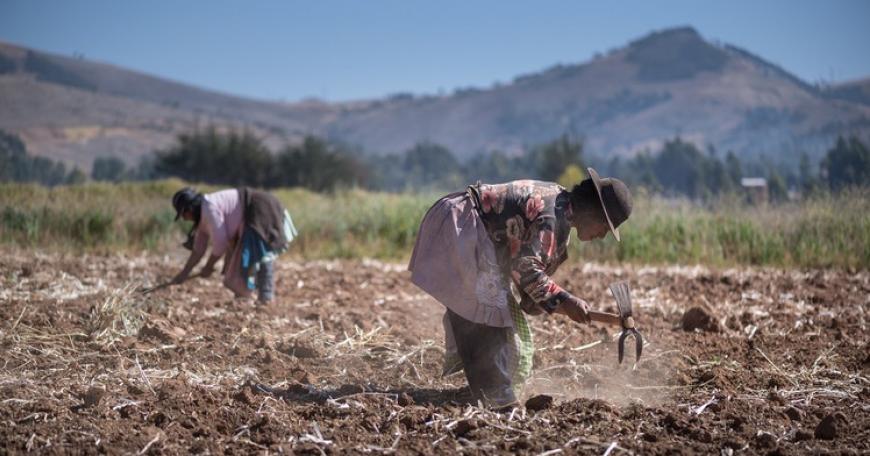 Improving Lives, Through the Lens of Economics

When Isadora Frankenthal Masc ’20 was an undergraduate in economics at the University of Amsterdam in the Netherlands, she began looking for ways to delve deeper into her favorite subject—development economics—and discovered the online MicroMasters program in Data, Economics, and Development Policy (DEDP), offered by MIT’s Department of Economics and the Abdul Latif Jameel Poverty Action Lab (J-PAL). It would be a consequential step for Frankenthal, who was born and raised in São Paulo, Brazil, and sees the field of economics as a way to understand and improve human well-being.

After completing her bachelor’s degree concurrently with the DEDP MicroMasters, Frankenthal returned to Brazil and continued to build experience in the field, conducting research for an impact investment firm and coauthoring a study on the cost effectiveness of various cancer screening policies. She also applied to the DEDP master’s, to complete the journey she’d begun from Amsterdam, this time, on the MIT campus.

I’m really interested in the relationship between economic development and the well-being of women, a question that is especially relevant in the context of Brazil and other Latin-American countries.

The innovative DEDP program is led by 2019 Nobel Prize recipients Abhijit Banerjee, the Ford Foundation International Professor of Economics, and Esther Duflo PhD ’99, the Abdul Latif Jameel Professor of Poverty Alleviation and Development Economics, and their colleague Benjamin Olken, director of J-PAL and the Jane Berkowitz Carlton and Dennis William Carlton Professor of Microeconomics. The master’s component, launched in 2020, is the first program of its kind for the MIT Department of Economics and the first at MIT to formally blend online and residential components. Frankenthal was thrilled to be accepted to the program as part of the first cohort and to receive a fellowship through the Vivian and Marcos Lederman–TVML Fellowship Fund.

Just a few weeks after she arrived in Cambridge in January 2020, the Covid-19 pandemic unfolded and the DEDP program, along with much of the Institute, switched to fully remote learning. Though she regrets the loss of in-person classes, Frankenthal credits MIT’s faculty with keeping students fully engaged and fostering a strong, interactive community.

“One of my favorite class was 14.750 Political Economy of Economic Development,” she recalls. In classes like 14.750, taught by Ben Olken, Frankenthal encountered the challenge that fascinates her most: identifying the specific factors and methods to illuminate complex social and economic issues. It was exciting, she says, to see faculty and students engaging in that process, together. “It’s always inspiring when somebody finds a really cool way to answer a question.” She also had the opportunity to work as a research assistant for Olken, bridging the classroom experience with hands-on research experience.

“I’m really interested in the relationship between economic development and the well-being of women, a question that is especially relevant in the context of Brazil and other Latin-American countries,” Frankenthal says. Her capstone report examines the impact of female labor productivity on domestic violence in Peru. “When the harvesting and processing of a crop require care-intensive tasks, for example in the case of asparagus, women have a comparative advantage and therefore employers favor hiring female labor. My idea was to combine fluctuations in international prices for crops that favor female labor with information on where each crop is grown in order to zoom in on changes in female labor productivity that are ‘as good as random.’ This makes it possible to answer the question—does increasing women’s employment and wages reduce domestic violence?—in a causal way.”

She was curious to see if the research would yield evidence of a negative reaction to women’s economic empowerment. “I found that female labor productivity decreases domestic violence, which is good news,” she says, but adds that there’s much more to learn. “I want to continue working on this, to understand the underlying mechanisms.” She hopes her research will help to address domestic violence, which remains a pervasive problem globally, especially in developing countries, with heavy costs to individuals and economies.

Frankenthal’s experience is precisely what Marcos Lederman hoped to support when he established a fellowship for DEDP students through the Vivian and Marcos Lederman-TVML Foundation. Lederman, a philanthropist and financier from Brazil, has been deeply engaged in building higher education in his country. He sees MIT as an inspirational model for Brazilian institutions as they grow.

“MIT is a place that I have admired for a long time,” he says. Supporting the DEDP program was a natural choice, Lederman notes, because it “ticks many boxes” on his list of priorities: application of rigorous data science when dealing with public challenges, developing robust public policy on issues like poverty, increasing diversity in higher education, and “investing in people.” He is pleased to see the DEDP program empowering individuals like Frankenthal and, through them, delivering benefits to the world. “This is, for me, 100% within the MIT and TVML Foundation mission.”

Three years after Frankenthal logged on to her first DEDP online course from Amsterdam, she is preparing to apply to doctoral programs and is more determined than ever to pursue a career in economics. “We need more women economists and definitely more Latin American women in economics,” she notes. Her experience at MIT and in the DEDP program have given her a glimpse of what she can accomplish.

“I was inclined to do a PhD program before this,” she says. “I’m absolutely sure now.”

This story was originally published in the Fall 2020 issue of Spectrum.